The Best Way To Trap And Repel Squirrels

The Best Way To Trap And Repel Squirrels

How do you know if you have a problem with squirrels? Squirrels are part of the rodent family, and just like rodents, they are trying to find a safe, warm home to raise a family. Most of the time, homeowners hear noises in the attic, perhaps running back and forth, as well as chewing sounds during the daytime hours.
You most likely won’t ever see the squirrels unless you go up into the attic. In that case, you could see insulation piled up, possible droppings (dark brown round pellets), and maybe leaves or branches that have been brought in for nesting.
You can likely find more than one squirrel living together during the winter months because the breeding season starts mid-December and continues through January. Gestation is just over one month, and squirrel moms can have two to four young in each litter. 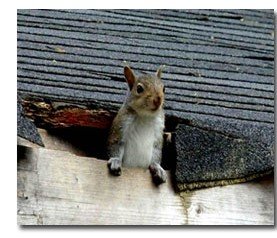 The Best way to trap squirrels

Squirrels are not usually aggressive, but they can cause damage to the roof by chewing holes through it or along the roofline. Do not attempt to trap squirrels on your own. Not only do you run the risk of injuring the animal, but most homemade traps usually catch everything except the squirrels. In Illinois, you need an animal removal permit to trap them; failure to follow this law could result in being charged for animal cruelty. The bottom line, when you start hearing noises in the attic, it’s best to call pest control. At Grizz Pest Management, our method is two-fold. First, we trap each squirrel; then, we repair any damage done to the home.

1.) Keep tree branches at least eight feet away from the roof.

2.) Keep bird feeders away from the house, or don’t use them at all.

3.) Don’t feed squirrels. They will start to associate your home with a food supply.

An unusual story about Flying Squirrels

We received a call from a homeowner who was hearing noises in the attic. Upon inspection, we found a mouse infestation in the attic. We then did our full rodent program, which eliminated their mouse problem. However, the homeowners continued to hear noises every night.

At first, there was no evidence of squirrels getting in – there were no large holes, no chewing of the roofline. Plus, the homeowners only heard noises at night, which is not common in gray or fox squirrels. We knew we had another type of animal here.

After further inspection and with these clues, we set up traps. We caught five flying squirrels, which are not common in the Chicagoland area. Flying squirrels are small and have large flaps of skin that, when their legs fully extend, act as ‘wings.’ They jump and glide from tree to tree.